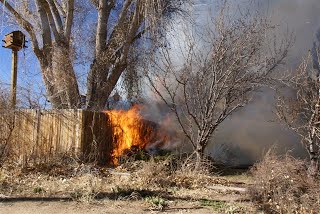 In La Plata County, burn permits are required for any open burning that is not agricultural or recreational. Fort Lewis Mesa Fire normally issues burn permits Monday -Thursday from 12:30-4:30 by calling 970-238-0115. Alternatively, FLMFPD has an online application for a permit that can be filled out at any time for processing during the work week.

Once you have been issued a permit and are intending to burn, you must call into Durango Non-Emergency Dispatch (970-385-2900) to notify them that you are burning.

Recreational Fires: A campfire that is smaller than 3’x3’ and is contained is considered a recreational fire.

Agricultural Fires: To be considered agricultural, the burning must be related to agricultural practices. Agricultural burning is not regulated, but is not recommended on Red Flag warning days and is prohibited during burn bans.

People conducting non-regulated burns are urged to call Dispatch (970-285-2900) to report the burning to prevent the fire department from unnecessarily responding to a report of a potential uncontrolled fire.

If you do not have a permit and conduct an open burning or violate a burn ban, the Sheriff’s office can issue a fine.

Burn permits are suspended on Red Flag days and during burn bans.